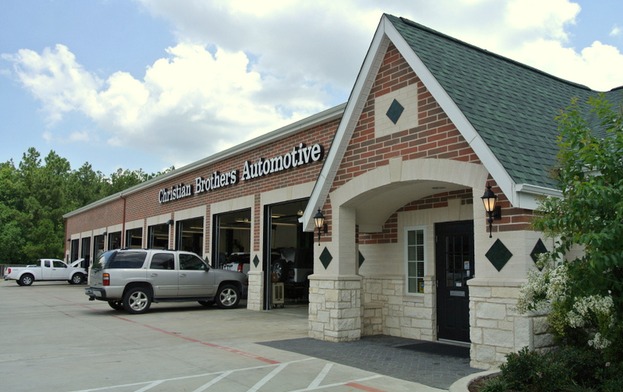 Charles Yun discovered Christian Brothers Automotive the same way many customers so: His car broke down. It was incredibly aggravating, because he had spent more than $1,000 on repairs just a year before — actually, it was about one year plus one day, which he remembers clearly because his service warranty had just expired. He wanted a better mechanic, and an auto repair business he could trust.

That’s when it hit him: Maybe I should open that business myself! The former Wall Street equity trader — who now lives in Chapel Hill, N.C., with his wife, Kimberly; son, Andrew; and daughter, Kelly — had been wanting to start his own business, and had been researching big convenience store chains and food retailers. His roadside ordeal led him toward a new path of inquiry: auto repair franchises.

That’s when he discovered Christian Brothers Automotive, a faith-driven franchise based in Houston, Texas that has been franchising since 1996, has more than 125 locations, and has never closed a shop. Now, Charles is on the cusp of opening the first Christian Brothers Automotive franchise in the Raleigh area, at the intersection of Holly Springs and Ten-Ten in the Western Wake area. The business is expected to open in mid-December. Christian Brothers is so confident that customers will be impressed by the service that they are about to begin constructing a second store in the Wake Forest area at the intersection of Rogers Road and Heritage Center Drive in anticipation of finding a franchise partner eager to be part of the business. A third store location will be in the Cary area at the intersection of Reedy Creek Road and Maynard Road and was just recently awarded to a family relocating from Michigan.

What led Charles to choose Christian Brothers Automotive? This is his story.

What brought you to North Carolina?

After graduating from college, I worked as an equities trader on Wall Street for 20+ years. A lot has changed. Technology became more advanced, and the internet and connectivity made it possible for me to telecommute and live in North Carolina. You don’t have to be on the trading floor anymore. I like the weather here, and it’s still on the east coast so it’s not far away if I need to go back to New York. It’s also a place where I could provide a solid education for my kids.

What made you decide to switch careers?

Technology allowed me to telecommute, but it also meant the company I worked for didn’t need as many people on the stock exchange. You just don’t need human beings on the floor anymore, so technology was both good and bad. I love trading, it’s in my blood, but the technical changes made me ready to do something different.

Tell us a little more about how you got interested in Christian Brothers.

After my car trouble, I went home and saw an ad for Christian Brothers, and went online to look them up. I had actually been in deep negotiations with another franchise, but they were very demanding and not very forthcoming when I had questions. I think God may have broken down my car to point me to Christian Brothers!

How was Christian Brothers different?

When I got in touch with Josh (Wall, vice president of franchise development) it was very easy and straightforward. They answered all my questions with clarity. I got in touch in the fall of 2012 and by Christmas time I was in Houston for a Discovery Day meeting with the upper management. Prior to the trip, Josh and I and my wife probably had six or seven phone interviews, and Josh was always very candid. Plus, since I have somewhat of a financial background, I was able to look at other franchises, and by comparing CBAC to other ones, I saw the way the business model works fits my personality. It’s unusual for a franchisor to take a true interest in the success of the business for the franchisee, and that’s what I liked about the business model. (Rather than charge royalties on a percentage of sales, whether a franchisee is profitable or not, Christian Brothers splits profits with franchisees — and it doesn’t split profits until the franchisee is already able to pull a modest amount of income from the store.)

Plus, as I looked for business opportunities, I was praying to the Lord for an opportunity to let me pursue His will and do business at the same time.

What are your goals for the business and what it will accomplish for your family and community?

First, it’s a business, so it needs to be profitable, since that’s what allows me to provide for my family, and for my employees so they can provide for their families. As a Christian faith-based business, when we become profitable, we look forward to being able to help people and organizations that need help. One of the things that attracted me to auto repair is that the industry as a whole has a black eye. I am fortunate to be in a situation where I can be a source of light for the community by providing great service.

How do the hours compare to the life of an equity trader?

The hours aren’t that different. On Wall Street, the market is open from 9 to 4, so I would get started at 8 and finish around 5. My hours as a Christian Brothers owner will probably be a little longer, and that’s fine. The days off were one of the other things that made Christian Brothers attractive. If you own a convenience store of a big food brand, you’re open 360+ days a year. With Christian Brothers, my store is open from 7-6, and it will be closed Saturday and Sunday. That means on Saturdays I can spend time with my family, and my employees can spend time with their families, and Sunday is the Lord’s day. It definitely fits my lifestyle.

Will Kimberly be active in the business, too?

She has her own career as a laboratory medical technologist, and she will continue to do that, but I have her 100% support, which is important.

How would you describe the support you’ve received so far?

Everything has been great so far. Everything is going according to plan, everything is on schedule, and everyone has been supportive. I can contact anyone from training to accounting and they are available for questions.

I was fortunate enough in May to attend the annual conference they hold, and there were 100+ store owners there. I didn’t know any of them, but I felt like they were all friends because they were all so congenial and open — true brothers and sisters in Christ trying to help each other and support each other. I’m very thankful. I’ve been keeping in contact with other new owners who are relatively close — one in South Carolina that recently opened and one that opened in Charlotte last summer — and I also got phone numbers from a number of people at the conference who have been in business for 10 years or more, who told me to call them if I have any questions.

Christian Brothers Automotive is growing nationwide, and is seeking great franchise partners who share our passion for service, and for giving back to the community. To learn about the background of the company and our business model, visit our About pages. For more interviews with Christian Brothers franchise owners, read our blog. To learn even more, fill out a form to start a conversation. We look forward to meeting you!