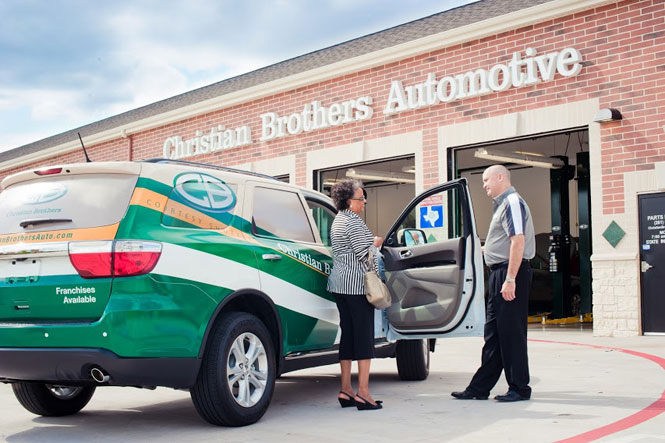 “Investing in a franchise can be a great opportunity for military veterans,” Editorial Director Molly Rowe writes in the introduction to the special report. “Many franchise companies offer special incentives and discounts to veterans to help get them started in business. But keep in mind, great incentives don’t always equate to happy franchisees. What really matters is what happens after you buy your franchise — does the special attention and support you receive before you buy actually carry over once you’re a franchisee?”

This is the second consecutive year that Franchise Business Review has named Christian Brothers Automotive a top franchise opportunity for veterans.

Franchise Business Review isn’t the only publication that has taken note of our value to veterans. USAA Magazine named Christian Brothers the best-performing franchise in a 2012 article that sought to answer the question, “What’s the best franchise for veterans?” What impressed USAA about Christian Brothers? We have never closed a shop, our franchisees have never defaulted on an SBA loan and we have one of the highest franchisee satisfaction scores, according to Franchise Business Review.

Bear in mind, the last part of USAA’s analysis was our customer satisfaction score, which has increased every year since that article was published. We still have never closed a store — and we’ve added dozens since then. Our SBA loan track record is still perfect, too.

The former head of engineering for U.S. Central Command (“CentCom”) came to the same conclusion while researching businesses. Army Col. Jud Cook retired in January 2013. The former commander at CentCom in Tampa, Florida, is a self-described “car nut” who started researching automotive franchises when he knew he would be retiring.

“I’m very interested in cars,” Jud says. “There is probably not a car repair show that comes on that I don’t try to catch. Also, my research indicated that auto repair is a very resilient business. Automotive repair continues to be something that everybody needs. They’re keeping cars longer, the cars are older and they need more repairs. When the economy improves, more people will buy new cars, which will mean more cars on the road that will need repairs. So, in addition to Christian Brothers being a Godly choice because of their values, it’s a choice that is economically advantageous.”

To learn more about the Christian Brothers Automotive franchise opportunity, fill out our form to contact our team and start a conversation with us. We look forward to introducing ourselves and learning about you!