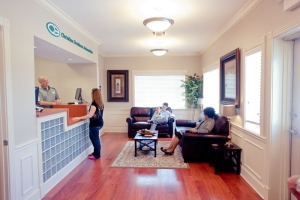 How long have you been a franchisee?

It will be 15 years in December. Prior to Christian Brothers, I was a marketing associate with Sysco Foods in Houston.

How did you first hear about Christian Brothers?

Well, I actually heard about them from my neighbor across the street, a gentleman by the name of Chip Fenner, who was the first franchisee. Not only was he my neighbor, but he and I were members of the same church as [Christian Brothers Founder and CEO] Mark Carr. I knew Chip and his family and we were good friends. I was curious why Chip, a CPA, chose to be an automotive franchisee. It intrigued me and I watched for a little while to see how he was doing with this new business.

What was it that made you decide to take the leap yourself?

I was at a point in my life where I really was feeling kind of stuck in the career that I was in. I made good money and felt like I was good at my job, but I didn’t really like it very much. I kept asking myself, “Is this all there is?”.

After watching Chip and several other friends that got involved with Christian Brothers, I kept hearing stories about it. It seemed like such a great company to get involved with. It was intriguing but I still was not willing to take that risk yet because I felt I owed it to my family to have some stability. However, I also felt like I was destined to own my own business at some point.

My brother-in-law, Walter Kane, was actually one of the first franchisees. He owned the McKinney, Texas, location until he sold it a few years back. I decided to call him and just see what the deal was with Christian Brothers, and right at that very moment, my wife called me and said, “I think you need to talk to Walter.” She knew I wasn’t happy with my job. That felt like God opened that door and confirmed, “Yes, it’s okay to look into this.” So we did, and it’s been a huge blessing in our life.

What’s a day in the life look like running a Christian Brothers franchise?

In the early days, you know, you’re right in the thick of things as an owner. You’re there first thing in the morning until you close at night, Monday through Friday. You start the coffee, make sure the lobby is clean and have a morning meeting with your employees to get them pumped up and ready for the day. Then you’re there to be an encouragement to them throughout the day, be the face of the business and deal with the behind-the-scenes business aspects as well.

Throughout the whole thing, you’re also problem-solving. Every car is unique with different problems. We work on all makes and models, so there’s just a plethora of different issues that we deal with. While we have great technicians and service managers, the owner’s definitely part of that problem-solving team.

As time goes on and you’re able to bring on more staff, the owner can step back. You can be somebody that lays the vision for the company. You’re able to do more of the job of running the business instead of reacting to the business.

How have you seen the brand grow and evolve over the years?

When the brand was new, they were really figuring out how to be a franchisor. There were growing pains that come with that. A lot of it had to do with technology; cars have changed a great deal in the past 15 years. Christian Brothers has done a great job of keeping up and actually staying ahead of technology and where that’s going, so we can be an industry leader instead of working from behind.

Going from 17 locations when I opened to more than 150 now, I didn’t think that was possible 15 years ago. I didn’t think it was possible to do that and keep up with the technology and have a home office team big enough to support us, but they have been strategic in the people that they’ve hired at the home office level. They really had a great vision then and continue to have a great vision now for our future growth.

At the same time, they haven’t lost their vision of taking care of the guests in a way that we would want to be treated. That has been such a big part of it, to keep the focus on the guests and not just fixing cars. We’re a company that is a lot like a hospitality company. We take care of the guests first; we just happen to fix cars and do a great job at it.

Christian Brothers franchises have inviting lobbies that tell our guests that we do things differently from other automotive shops.

What is it about Christian Brothers that really appeals to guests and brings them in the door and back for repeat business?

The main thing that brings them in the first time is word-of-mouth. New guests hear about us from their neighbors. We’re in the small town of Flower Mound, we have about 60,000 people here. Now, there’s probably not anybody that hasn’t heard of us, 15 years later. Word-of-mouth has been crucial, but that only works if the word-of-mouth is good. We’ve had to develop a good reputation over the years of taking care of people. We do our very best to treat guests like we would want to be treated, as part of the family.

When I got into this business, this industry was definitely not known for customer service; just the opposite, actually. Christian Brothers really stood out at that time in the industry as a company trying to be different. A lot of companies have followed our lead; everybody’s got a guest shuttle now, a whole lot more people have a clean lobby with nice leather couches. 15 years ago, nobody had that. Fast-forward to now, we have to go even farther and provide what I call just really over-the-top service to our guests. There’s all kinds of things that we do that make people say, “Wow, why would we go anywhere else?”

Are there any memorable interactions with any specific guests that have stood out over the years?

We have one guest in particular that’s been coming to us for probably 14 years, a very loyal guest. At one point, he told us, “Man I’ve been coming to this place so long and entrusted you folks so completely with my business.” At any given time, he has five vehicles that he keeps for a long time and spends a lot of money maintaining and repairing them.

After a long time, he came and told us, “You know, I need to look around and make sure I’m getting the best value here.” He left for about a year, and then he came back and apologized. He said, “Man, I should’ve never left. Nobody can possibly take care of me the way you guys take care of me.” He’s been a loyal guest ever since. As a matter of fact, I’m planning on inviting him to our company Christmas party this year. I’ve never done that with a guest before, but he’s the best guest you could ever hope for.

On the 20th anniversary of Christian Brothers franchising, where do you see the brand going over the next 20?

I see the brand spending a lot of energy and effort on fine-tuningtraining for owners and managers. A big focus is going to be on employee retention, both management and technicians. We’ve got very high standards for technicians, so we want to ensure Christian Brothers is competitive in recruiting them. I know that we want to develop a training center for technicians to help with that.

As far as growth goes, I would be surprised if we don’t double in size, and that might be conservative. We’re going to get much better at just about everything that we do. So far, we’ve proven that when we set our minds to do something, we do it.

OWN A CHRISTIAN BROTHERS AUTOMOTIVE FRANCHISE

Founded in Houston in 1982, Christian Brothers is an automotive repair facility based on a core philosophy of honesty, integrity, reliability and exceptional customer service. The company provides full-service automotive repair for all domestic and foreign vehicles, and prides itself on providing a pleasant, professional and clean automotive service experience every time.

If you’d like to learn more about owning your own Christian Brothers franchise, contact us to learn more. We’d love to start a conversation with you.