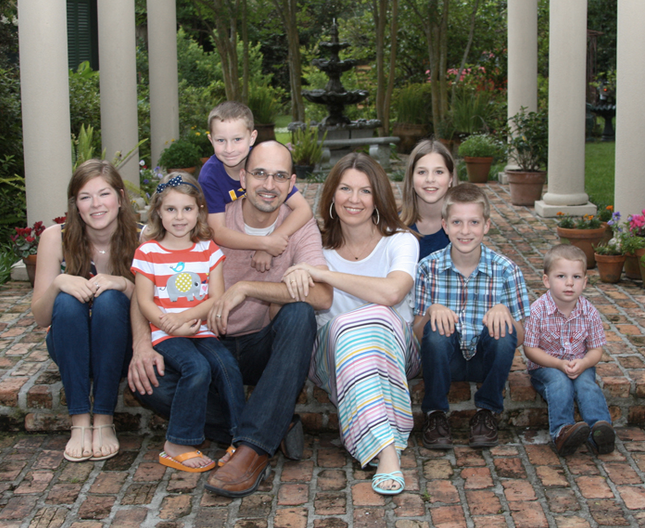 THE CHRISTIAN BROTHERS FRANCHISE IS EXPANDING IN THE CHARLOTTE AREA. READ WHAT OUR FIRST AREA FRANCHISE OWNER SAYS ABOUT THE BRAND.

While Jade Stanford is always true to his faith, it was both wisdom and trust that led him to purchase a Christian Brothers Automotive franchise and a new life for his family.

A father of six, Jade jokes that his favorite vehicle is a 15-passenger Ford van. It has room for all his children and a friend for each.

It was that same kind of abundance Jade acquired when he bought his franchise in 2013. He is able to use his expertise to grow the business in Concord, North Carolina, with people who have similar Christian values, all while providing for his family.

“The Christian Brothers Automotive mission statement is to glorify God by providing ethical and excellent automotive repair service to our customers,” Jade says. “In my job, that’s what I want to do. Those things have to intersect. It’s not God over there and job over here. God is in everything. I appreciate being able to go into business where that is embraced and that is the standard.”

What were you doing before Christian Brothers Automotive?

I was the general manager for another auto repair center for nine years. Before that I was in the commercial tire business for about six and half years. I gained experience there and then got into automotive, including the retail side of the business. We handled general repair, so it was tires as well as A/C repair and coolant repair. I also enjoy working on my own vehicles.

How did you find out about Christian Brothers?

My first awareness of Christian Brothers was when I was working in the automotive care business. It was either in Motor Age or The Tire Business magazine that my wife, Jennifer, picked up to read. It was Jennifer who pointed out that if I were going to open my own store that it would look a lot like the one Christian Brothers was promoting — a business that glorified God through excellent service.

About two years later, we wanted to do something different, and Jennifer recalled the advertisement. I looked at it, but I wasn’t immediately drawn to the idea. But I have a wise wife, she blesses me. She’s a Proverbs 31 woman, and she brought me some information about the company. We prayed about it, and we decided to walk down that path.

I set up a meeting with Josh Wall of Christian Brothers, and the meeting with him was phenomenal. Josh does a terrific job of checking to see that people coming into the business will be a good fit. They take the time necessary to vet potential franchise owners. That attention to detail gave me a lot of confidence. They weren’t going to sell just anyone a franchise.

What aspects of the Christian Brothers franchise system sealed it for you?

There was so much that I came to appreciate. For example, I really liked that they had a five-day work schedule. I have six kids. Business is important, but it’s not the most important. In my life, its God, family, then business, and Christian Brothers Automotive allows me to do that.

They also have a solid business model, and they truly support franchise owners. The tools that they provide to run your business are exemplary. The training is thorough and comprehensive. They give you every opportunity to be successful, and they have a track record to prove that what they provide delivers.

What brought you to Concord, North Carolina?

They identified two locations that met their requirements, but they were too close to my former business. That’s really how we ended up choosing a different site in North Carolina.

The beautiful thing about it is we didn’t set out to go to North Carolina. We submitted to God every step of the way. Geographically, where we set down roots was just not that important. God had a plan for us, and He helped us.

Tell me more about why you didn’t want to be in competition with your old employer.

God had blessed me with my former job. He sent me to build that business, and he blessed that business. It didn’t make sense to me to do anything that would tear it down, or to be perceived as tearing it down.

I was at that location serving as the general manager for seven years. Prior to being named general manager, I had made the decision to go into business with my brother-in-law in Arkansas. The decision was fueled by my desire to provide for my family — with all these kids, I needed to grow financially.

I gave my boss six months notice, and two weeks later he came to me with a plan that he thought would be a win-win, which gave me the opportunity to manage a failing location. We discussed it at length, and I decided to take over the location and not move my family.

At that point, I really saw the Lord’s provision in my life, and within a few months of operation we had tremendous success. And the Lord blessed us financially through that and I got a lot of great experience with employees and customers. I am grateful, and wasn’t interested in doing anything that might take customers away from that business, which is why we decided to move to start our Christian Brothers.

What was the process like, becoming a Christian Brothers franchise owner?

We began conversations with Josh Wall, and we probably spent about four hours on the phone collectively with him. He really did a great job outlining how the company operates, what Christian Brothers does to help you buy a franchise. I also took a personality profile.

As I learned more, I saw that the company had a very comprehensive plan and business model. At that time, I believe there were 82 locations, and all of them were successful. Today, they have 130 locations, and no stores have closed. I was really impressed with the success of the company.

My wife and I read through all the materials, including the franchise disclosure document, which was pretty thick. But it was as we expected. We made the decision to go forward, and we sent the franchise fee and signed on the line.

Then we worked with a real estate developer, who helped to scour the area and study demographics. They try to control everything they can to provide a site that will be successful. Location is an extremely critical element.

There were only two sites they felt good about, and I wasn’t willing to move forward with those two sites because they were too close to my old business. Christian Brothers pursued other opportunities, but that didn’t work out. This lasted for about six months, but nothing panned out. That’s when they decided the Baton Rouge market was closed.

It was my wife who asked where we needed to go. I looked at her like: “Wait a minute, we didn’t talk about this. And, they said Charlotte, North Carolina, and I was like, wow!” It was way outside the box of what I was thinking.

Up to that point, the prayer had been, “Lord, please protect me from my own ignorance because I can’t know what’s coming. The second part of the prayer was, “If I’m going the wrong way, please stop me.”

In the Bible, at least two times Paul is headed in the wrong direction on his journey, and the Holy Spirit intervenes. As I continued to submit to God, I asked the Holy Spirit to lead us. Our prayers let God choose. We visited Concord, North Carolina, and we really felt at peace. We told Christian Brothers to go ahead with developing the plan.

How large is the opportunity?

It’s unlimited. There are single locations that are doing a huge amount of business volume, and Christian Brothers also has a plan in place for people who want to open multiple locations.

The automotive business is sometimes compared to the medical industry, and here’s why. The majority of your clients are not experts in what you’re doing, so there is a tremendous amount of trust that you are operating under.

There is a demand in the market for people who provide comprehensive, ethical service. Customers need to know that someone is looking out for their best interest.

Both Christian Brothers corporate and the franchise owners are committed to core values. If all owners aren’t committed to that, then the reputation of our company can quickly erode and affect the operation of other locations.

If we say we’re a Christian company, but the way we operate contradicts that — you’re not going to stay in business very long. People will see you as opportunistic and a fraud. Our name may actually put us under greater scrutiny. And I’m O.K. with that.