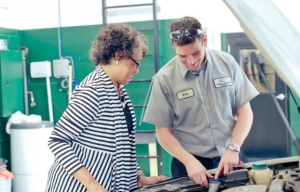 Franchisees who are part of the Christian Brothers auto repair franchise saw a significant jump in business this year. Our company posted an increase in average franchisee earnings in its 2015 Franchise Disclosure Document, which documents earnings from the previous year.

“These numbers are validating for our philosophy that we provide the ‘nice difference’ in our industry,” says Mark Carr, Christian Brothers CEO. “The rise of our average in-store revenue is evidenced not only in how much we’ve grown in the past few years, but in why we’ve managed to grow successfully. We treat all of our customers with dignity, our work is done with honesty and integrity, and more and more people are taking notice.”

Our franchise recently announced plans to open 35 new Christian Brothers locations, which continues the strong growth that has earned us recognition from Entrepreneur magazine and Franchise Business Review. Our auto repair franchise currently has 150 locations in 21 states, and is expecting a record year for franchise development in 2015. Our company has never closed a location — a rarity in franchising and a feat that only the most enduring franchises in our industry typically witness. This fact highlights the staying power of our auto repair franchise and the stable investment opportunity for prospective franchisees who wish to open their own Christian Brothers location.

Our faith-based business — one that’s focused on serving others — uses the phrase “nice difference” to explain how we stand apart from competitors. The phrase applies to our customers and to our franchisees, thanks in part to a unique revenue model that helps attract people who want to live their faith in their business. Our business model also destroys the negative stereotypes surrounding auto repair by creating a clean, comfortable environment that customers enjoy.

Unlike most franchises that usually require a large initial investment and liquid capital, Christian Brothers’ business model makes it possible to start a multimillion-dollar business with a relatively small investment from the franchisee.

“People looking for a franchise opportunity will find that a modest investment with us could very well become a multimillion-dollar business,” Mark says. “Not only are those up-front costs minimal, but our management support helps our franchisees become profitable.”