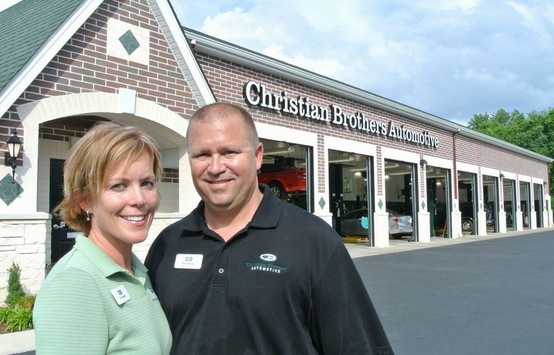 Two Ten Magazine dedicates itself to inspiring Christian business leaders and equipping them with the knowledge they need to make a positive impact in the world. That’s why we are thrilled that they recently chose to profile the Christian Brothers Automotive franchise. We share the same core principle that business ownership offers the most value — to both the owner and the community — when the business is firmly rooted in Biblical principles.

Faith is at the heart of the Christian Brothers Automotive story. CEO Mark Carr shared his faith journey with the magazine:

Mark Carr, CEO of Christian Brothers Automotive, had an encounter with God that he described as being like the Uncle Sam poster, calling out, “I want you!” It was one of many conversations he had with God over the past 40 years that led to the creation and growth of the most successful automotive repair franchise in the country.

It is an amazing journey for a man who barely made it out of high school. He worked as a bartender, toilet cleaner and ditch digger, and he did just about everything known to man in terms of lousy work. Leaving the small tourist town in upstate New York where he grew up, he went to Rochester and applied at Eastman Kodak—the place where you go to work and have job security for the rest of your life. When he was told there weren’t any openings, he took a job collecting garbage. After all, he had experience with lousy work.

Eventually, Kodak called, and he thought he was set for life. But after five years he discovered there was no opportunity for him to get ahead, so he quit. With no job prospects, he scanned through the want ads of two newspapers, The Houston Chronicle and the Rochester Times. The want ads section in the Chronicle was thicker, so with $4,000 in his pocket, he packed his 1977 Corvette with everything he owned and drove to Houston to start a new life.

“All those want ads in Houston, and I couldn’t get a job,” Mark said. “I finally dropped to my knees and prayed: ‘God, my life is a mess. I don’t know what to do with it anymore. Just take it.’ That was when I turned my life over to God.”

Three days later, Mark got a job selling photographic murals. Although he did well, eventually, he became an order-taker, and once again he was on his knees: “God, would you bring me a business opportunity? You designed me differently than this. I am bored.” The next day, a friend in his Sunday school class approached Mark and asked if he would partner with him to start a car repair shop. God had answered his prayers.

He bought a piece of land, built a building and started Christian Brothers Automotive with his friend. Too afraid to work in his new business full time, Mark kept a full-time job, but was not doing well financially. “I had two kids, and I couldn’t make enough to provide for my family.” He said: “I was about to lose my house. I had two cars in the garage that were worth less than I owed on them. I couldn’t even afford a Happy Meal for my son.”

Mark sought guidance from his grandfather, a man he admired and respected. Mark recalls his advice: “God gave you that business. Why don’t you just go run it?” Mark had a hundred reasons not to go all-in with his new business, but the biggest was fear of failure. “I felt like it was my last straw. If I went over there and I failed, I would be finished.” But Mark took his grandfather’s advice, and in 1989 he went to work at Christian Brothers Automotive full time.

It was difficult at first, because there wasn’t a place for Mark at the automotive shop. “I had a guy running the store who was an incredible mechanic. I essentially demoted him to working in the shop as a mechanic while I worked up front. Within 90 days, our business increased thirty percent. I took it as God’s verification that I was supposed to be there, because I really hadn’t been there long enough to make a difference. It wasn’t long before we were so busy that I asked my mechanic to come back inside and be our service manager. He did, and he is still with me today, 30 years later.”

Thirty years later, the impact of Christian Brothers Automotive has multiplied. The business began franchising in 1996 after several members of Mark’s church asked if they could open their own locations. In the 18 years since, Christian Brothers has expanded to more than 125 locations nationwide and has made a difference in the lives of countless franchisees and their employees. We’ve never closed a location, and we remain eager to share in the success that the business has made possible.

To learn how the company has evolved and what makes us special in the automotive industry, visit our Why Franchise pages. If you are interested in owning a faith-based franchise business and want to learn even more, fill out a form to contact our team and start a conversation. We look forward to meeting you!