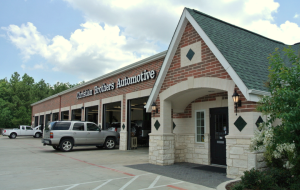 The Cincinnati Business Courier broke the good news to residents of the Queen City: Christian Brothers Automotive auto repair franchise has opened its first location in the area.

In an article entitled, “This Local Franchisee’s Motto May Raise Eyebrows,” the local publication describes the unique way that owner Doug Beachy, a former account executive at a large management firm, decided to get into the auto repair business.

Doug was watching “Deal or No Deal,” the hit television game show, and found the show’s emphasis on “go big or go home,” to be an irresponsible way of making a financial decision. Doug decided to do the exact opposite and open a business with motto: “Go small or go home.”

“When the contestants were faced with the question of risking their current winnings for a chance to win more, their answer was always, ‘Go big or go home,’ and you’re always seeing that in the corporate world today,” Doug says in the article. “My friend said to me, ‘That’s just totally wrong,’ When it comes to making a difference in the world, instead of waiting around for something big that may not happen anyway, go small and go home.”

We’re growing in Cincinnati and all over the nation

Doug might be opening the first Christian Brothers auto repair franchise location in the Cincinnati metropolitan area, but our brand is growing like wildfire across America. We believe that our tremendous growth is the result of our faith-based business model. Our customers return to us again and again because of our ethical business practices. By allowing our owners to live their faith in their business, we have not closed a single Christian Brothers store since we began franchising in 1996.

A shining light in the industry

Treating customers and employees with dignity and respect is evident in the services that Christian Brothers offers to its customers. Each store has a courtesy shuttle to help customers get to work — or anywhere else — and back while their cars are being repaired. They can also go to work knowing that they will not have to give up their weekends to having their cars fixed, because Christian Brothers is closed on Saturdays.

We close on Saturdays not only to give our employees a full weekend but because in doing so, we are able to attract the most talented mechanics, who enjoy knowing they’ll be able to spend the weekend with their families and friends.

For in-depth details about the Christian Brothers Automotive franchise opportunity, contact us today!