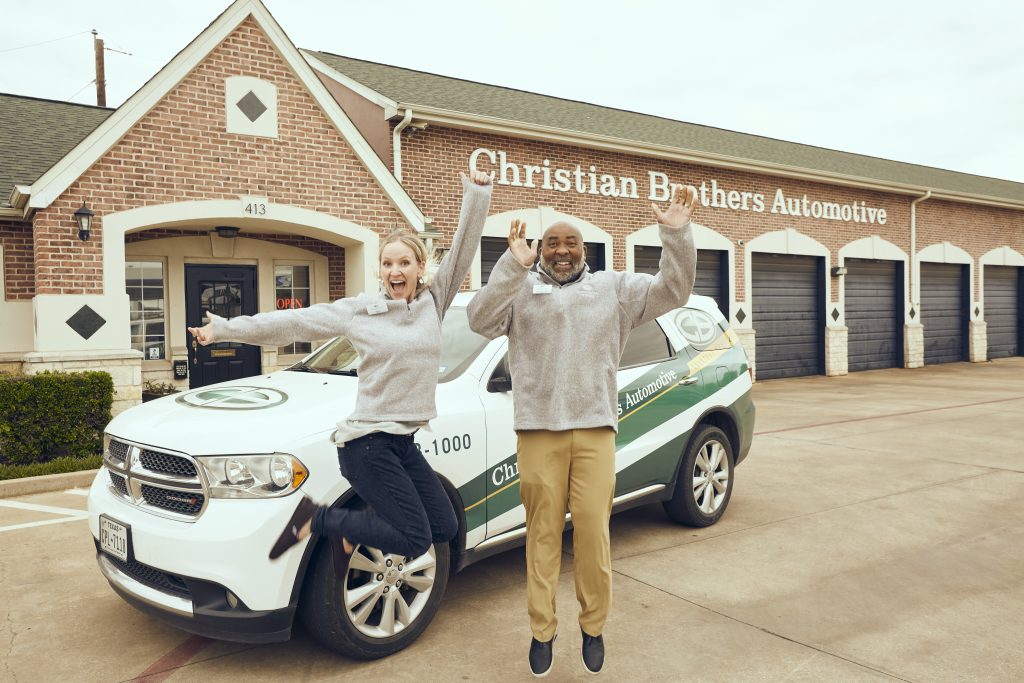 When Keith Guyton first laid eyes on the building across from his new apartment in Round Rock, Texas 16 years ago, he didn’t quite know what to make of it. Little did Keith know, this would be his first introduction to the Christian Brothers Automotive brand and the beginning of a long, rewarding relationship that would nurture both his professional and spiritual growth.

From Inside the Shop to CBA Franchise Owner

While Keith Guyton left high school at 16, he did not let that stop him from growing his knowledge and skills in automotive repair. By gaining a firm understanding of general service technician work, like changing oil and tires, and finetuning his efforts in front end alignments, Keith exited his early adulthood feeling confident in his skillset. “I became a pretty good mechanic, but nowhere near as good as our current CBA shop mechanics,” Keith jokes.

After overcoming some personal hardships, Keith set forth to find stability in employment and continue building on his faith. In 2007, he walked into our CBA Round Rock, Texas location asking about open positions. When Keith was invited in for an interview by previous shop owner and now longtime friend, Chip Jennings, Keith was delighted to be hired on the spot. Starting in 2007, he worked his way up from service writer and manager to become the Georgetown, Texas shop owner in 2017. Through hard work and support from our Home Office staff, Keith has grown into a successful multi-unit owner with his Georgetown and Round Rock shops. His soon-to-be third shop is currently in the pipeline. In 2022, Keith’s Georgetown shop broke $3 million in revenue for the first time, an accomplishment that can be credited to both Keith and his hardworking shop team members.

An important step in Keith’s development here at Christian Brothers Automotive was finding people within our organization who wanted to help him thrive. Guiding him both professionally and spiritually, Keith thanks Chief Neighborly Officer at the Home Office, Zach Bynum, for teaching him how to be a giving person while also running a profitable business. Other team members that Keith grew strong relationships with are the sons of CBA Founder, Mark Carr – Donnie and Jonathan Carr, or “The Boys” as Keith lovingly calls them. “I love those guys. They are so humble and down to earth.”

Working with Jonathan for seven years, it was with his support that the Georgetown location was sold to Keith in 2017. Furthermore, it was Jonathan who nominated Keith for the Future Franchise Leadership Academy (FFLA) program, and along with three other gentlemen, he was a part of the first class to complete the two-year program. Keith is still friends with FFLA members to this day and they are all owners of their own respective shops. Keith is now a mentor for the CBA FFLA program and currently supports three class members by sharing his expertise and experience with them.

In addition to the support Keith has received from the CBA team, he always remembers the person who has been his number one supporter since the beginning; his wife, Mauri. “She believed in me and spoke life into me when I was about to own my first shop. I would not be where I am today without her.”

Finding a Way Back to Faith

With an overarching mission to take care of people and stay humble, Keith lives his life by Matthew 6:33 – “But seek first the kingdom of God and his righteousness, and all these things will be added to you.” By seeking God in all he does, Keith understands that for good to come to him, he must put goodness out into the world. Through his CBA franchise locations, Keith takes care of people and treats every guest like family. In fact, Keith has been fortunate enough to serve multiple generations of families. “I have guests that have been coming into my shop for years and my team has worked on not only their kids’ cars but their grandkids too.”

One word that Keith would use to describe his journey at CBA is empowering. “From the time I started, I had people supporting me and telling me I was doing a good job. That felt really good,” Keith says, “I am blessed beyond measure. Anybody who has a heart for God and people should be affiliated with this organization; It has changed my life for the better.”

The entire CBA team is overjoyed at the success and personal growth Keith has seen during his time with us and we look forward to his continued development in the years ahead. If connecting with your community and making a difference through automotive repair sounds like a journey you want to start, please complete our franchise inquiry form to get in touch with a member of our team today.