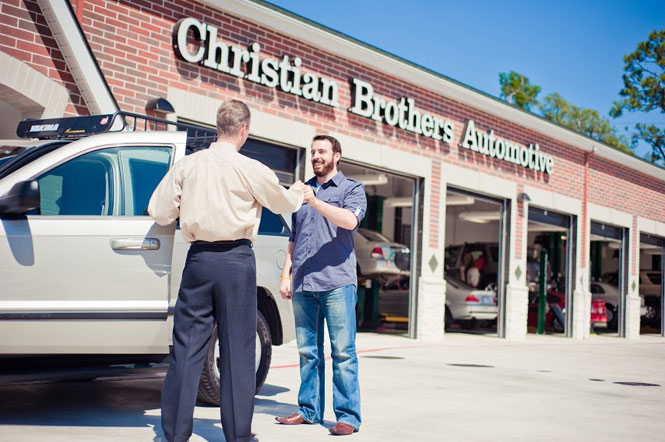 The article highlights Charles’ fascinating background: he came to America from South Korea at the age of nine knowing only three words of English. Charles’ hard work led him to a successful career as a day trader on Wall Street — a career he gave up in exchange for a more peaceful life in North Carolina for his wife and two children.

“I was looking for land for other franchises when the ‘check engine’ light came on in my 10-year-old Odyssey,” he says in the article. “I was angry because I thought I had the problem fixed a year ago. I realized this was a message from God that this is a business that has a black eye with the public and you could help out.”

Christian Brothers knows it’s important for people on the go to have faith in their mechanics, and we treat customers and employees alike according to the Golden Rule.

Our respect for our customers’ time and dignity is evident in the services we offer our customers. Each store has a courtesy shuttle to help customers get to work — or anywhere else — and back while their cars are being repaired. They also don’t have to give up their weekends to having their cars fixed, because at Christian Brothers, we get all the repair work done during the week.

“What makes us unique is that we can service every make and model from A to Z,” Charles says in the article. “We use the best parts. They are not second-market, cheap parts.”

We’re growing around the country

While Charles is celebrating the opening of the first Christian Brothers auto repair franchise in Chapel Hill, many more locations are in development around the country.

Christian Brothers has 140 locations in 18 states, with 20 in development, and we’ve been growing like that for years. In 2013, Christian Brothers opened 16 new locations; in 2014, we opened 12 more. This growth is reflected in our sales numbers — they are climbing, too. In the first quarter of 2014, average same-store sales were markedly higher than sales of the same period a year earlier.

One of the main reasons for our rapid growth is that our franchise owners are willing to live their faith in their businesses. The article closes with Charles speaking about how excited he is to be part of a brand that has values rooted in biblical principles:

“I like the fact that they’re faith-based and open and transparent. I get to practice my faith in this business,” Charles says in the article. “We definitely practice Christian principles. We have Christ’s name on the building.”