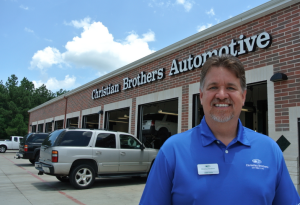 RESPECT FOR FAMILIES, FAITH, AND CUSTOMERS MAKE THE AUTO REPAIR FRANCHISE A SUCCESS

There are 250 million cars on the road in the United States, and every one of them needs maintenance and repair. That’s just one of the reasons why Christian Brothers Automotive is thriving as a family-owned business. We offer auto repair service and maintenance for every vehicle: gas or diesel, foreign or domestic, car or truck. Christian Brothers Automotive shops have the same manufacturer-recommended equipment and diagnostic tools as the dealerships, but our local ties and industry partnerships allow us to offer better prices. All of our locations are independently owned and operated, and the owners are on-site.

“Being a Christian Brothers Automotive franchisee has allowed me the opportunity to own my own business while still having home office support available whenever needed,” says Jeff Toth, who owns a franchise with his wife, Robin, in Woodlands, Texas. “It’s refreshing to have the chance to demonstrate what it is to be a Christian businessman and to be encouraged to let the light of Jesus shine through me and my business.

“Everyone in the organization, from other franchisees to members of the home office, is there to help you succeed. Owning a Christian Brothers Automotive has enabled me to fulfill a desire of business ownership and enjoy the benefits that come with it.”

The best part of their job, they said, is the ability to show the customers and the automotive team a “love your neighbor as yourself” mentality. Jared’s father taught him the fundamentals of business leadership and cultivated in him a passion for Christian servanthood.

Keith Slemp’s family opened a Christian Brothers franchise in Murfreesboro, Tennessee, 11 years ago. He says his family’s involvement in the auto repair business began when his father, a soldier in World War II, came home and opened what was then known as a “service station” in Johnson City, Tennessee.

“I wanted to finish my business the way my dad started his: repairing automobiles,” Keith says. “Our goal for your visit is to treat your car and your family just like it is one of ours.”

The franchise also focuses on making sure customers leave happy. A courtesy shuttle makes the service convenient for customers during regular business hours.

According to IHS Automotive, the average age of a car is almost 11.5 years — and that average is expected to reach nearly 12 years by 2019. IHS also says new car buyers are planning to keep cars more than a decade and drive them in excess of 200,000 miles.

So not only are there 250 million cars on the road, they also make up the oldest fleet of cars in U.S. history. Americans are repairing their old cars in favor of buying new cars — spending more than $500 a year per car on maintenance and repairs, according to the U.S. Bureau of Labor Statistics. This makes Christian Brothers a recession-resistant franchise.

Total investment for a Christian Brothers franchise starts at $403,100, and most candidates have between $75,000-$100,000 in liquid capital. Because Christian Brothers purchases the land and pays for the building, it’s possible to get into the car repair industry with far less investment than other auto repair franchise options.