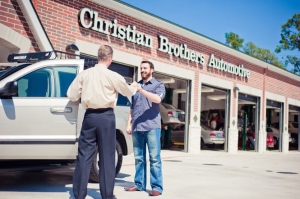 Of the two new stores in the Wichita area, one is run by a couple of out-of-towners. When Bob Morris heard that Christian Brothers were seeking to expand their territory in Wichita, he and his wife decided to make the leap from Atlanta.

“Morris is coming to the business after years of work in civil and geospatial engineering,” the article states. “He and his wife are from the Kansas City area, but they were living in Atlanta when Morris did some engineering work for Christian Brothers, a Houston-based company. He says the brand appealed to him, and he later learned that Christian Brothers was looking for a franchisee in Wichita — an area he wanted to move back to.”

Morris’ Christian Brothers location opened in May, and another location is scheduled to be up and running by the end of the year, says Josh Wall, Vice President of Franchise and Strategic Development.

Why is our expansion such a big hit with the media? Our track record for success is unusual in an industry rife with negative associations. Since we began franchising in 1996, not a single one of our 140 automotive franchise locations across the nation has closed. We credit our success to our faith-based approach to our business: we let our owners live their faith in our locations. In turn, our growing base of customers knows that our work will be done with honesty and integrity.

The article highlights that Christian Brothers intends to further strengthen its territory in Wichita with plans to add a third automotive franchise in the area.

“Christian Brothers eventually would like a third location in Wichita, but that likely will be a few years down the line,” the article reports. “Wichita made sense as an expansion target partly because Christian Brothers already has a presence in several other cities in the region, including Kansas City, Oklahoma City and Tulsa.”

We use the phrase “nice difference” to explain how we differ from our competitors. The phrase applies to our customers, certainly, but also to our franchisees — thanks in part to an unusual revenue model that helps to attract people who want to live their faith in their business.

Christian Brothers is a highly rated, faith-based auto repair franchise with a unique financial model. The company assumes a majority of the risk by purchasing land and constructing “built-to-suit” buildings, which the franchisee then manages. Unlike virtually every other franchisor, the company doesn’t charge franchise fees based on top-line revenues, but rather on a share of the profits, which is calculated after expenses. Franchisees also pay themselves a salary before they pay the franchisor a nickel.

We offer another nice difference to franchisees — we encourage our franchisees to take time to honor God, to be with friends and family and to serve their communities by closing every Christian Brothers location on the weekends. That is incredibly unusual in the automotive repair franchise industry.

“People looking for a franchise opportunity will find that a modest investment with us could very well become a multimillion-dollar business,” Christian Brothers CEO Mark Carr says. “Not only are those up-front costs minimal, but our management support helps our franchisees become profitable.”